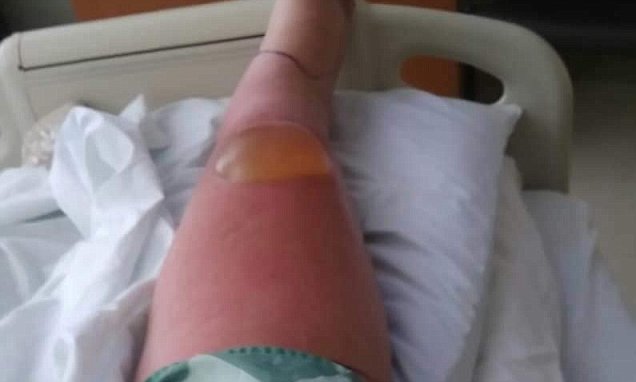 A woman has issued a warning to other pedicure lovers after contracting an infection that almost cost her a leg.

Tracy Lynn Martinez, 35, went for a pampering session at her local salon in Winston Salem, North Carolina, on June 22.

By the next day, she had full-body chills, felt nauseous, and started vomiting. She tried to sleep it up but woke up feeling dizzy – then saw her leg had swelled to triple its size.

Martinez called an ambulance and doctors quickly diagnosed her with a severe case of cellulitis, likely developed from a strep infection from a ‘callus cutter’ used to slice rough skin off the balls of her feet.

After two weeks in hospital to stabilize her condition, Martinez is now being discharged – with a three-month course of medication and compression socks – and she is urging other people to beware a seemingly harmless pedicure.

‘I just wanted to share my story to save someone from going [through] what I’m going through or even death,’ Martinez wrote in a Facebook that has since swept the internet.

She described the salon as ‘A grade’ which seemed ‘very clean’ with ‘very nice people’.

‘The whirlpool baths have the disposable bags, and they bring the new fresh tools in a new bag,’ she said – before adding that they ‘also bring a nice bacteria infected callus cutter too.’

Martinez said she now knows that ‘major chills’, as she felt, are a tell-tale warning sign of a strep or cellulitis infection after a pedicure.

At the time, she assumed she had come down with a cold. Despite vomiting, and feeling so dehydrated that she had to drink 23 bottles of water, Martinez tried to battle through.

Once she lost her balance, however, and her leg swelled up, she knew it was nothing…